The MIGs formed after most of the members of Luton Town’s first active hooligan firm of the 1970s, known as “BOLTS”, received banning orders or prison sentences. They have had rivalries with firms from Watford and Queens Park Rangers.

The events on 13 March 1985 when Millwall visited Kenilworth Road to play Luton Town in an FA Cup quarter final match, whilst not instigated by the MIGs did have an effect on future matches between the two clubs. The hooligan element among Millwall’s fans , The bushwackers, started to riot, and invaded the pitch.  The game was halted after just 14 minutes of play and the referee took both teams off for 25 minutes. When he blew the final whistle, the pitch was invaded again. Over 700 seats were ripped out of the stands and the surrounding streets also saw more violence. The violence that ensued resulted in a ban on away fans by Luton Town, which in turn resulted in Luton’s expulsion from the League Cup. The ban on away fans was lifted by Luton in the 1990–91 season. There was a later famous incident involving the MIGs, when they smashed up the George pub next to Luton bus station frequented by the Hells Angels. This must have been late 80’s too, when the George replaced the Blockers as one of the main ‘alternative’ pubs. 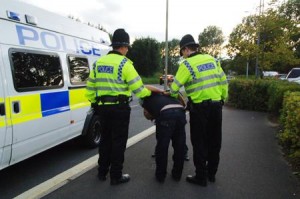 March 1988 saw the arrest of 8 fans during dawn raids on 17 homes by police. The 8 arrested were aged between 24 and 38 and were accused of belonging to a gang called the ‘MIGS’. All were charged with Conspiracy to commit acts of disorder. Eventually all 8 had the conspiracy charged dropped, though 5 were charged with lesser public order offences. Operation Spoonbill

In March 2000, on the fifteenth anniversary of the Luton riots, a group calling themselves “MIGs 2000” were blamed for revenge attacks on Millwall fans when the two teams met at Kenilworth Road. Bedfordshire Police stated that they were aware, weeks before the match, of plans by MIGs 2000, to attack Millwall fans in retribution for the events of 1985. Some members of MIGs 2000 were said to be sons of the original 1970s BOLTS crew members – the first active Luton Town football hooligan firm. They were said to want revenge with the attitude of, “They’ve trashed our town once they’re not doing it again.”

The police launched a huge match day operation, bringing in 130 police officers as well as police horses, dogs and a helicopter. Ten people were arrested on the day of the match. Before the match two pubs where Millwall fans were drinking were attacked. About 30 MIG 2000 threw bottles at the Duke of Clarence in Upper George Street at about 1:30pm and tried to force their way into the pub to attack Millwall fans peacefully drinking inside. Glass doors were smashed and the manager ordered his staff out of the bar for their own safety. Police had to deal with a similar incident an hour later outside the Nelson Flagship pub in Dunstable Road when the Luton gang had doubled. Whilst Millwall fans had a fierce reputation, it was the local Luton hooligans who were entirely blamed for the violence and the Millwall fans were praised for their generally good behaviour.

Earlier that season, Luton fans were strongly criticised by the police when during a home game against Cardiff City they set fire to a Welsh flag in the wooden main stand which the police said could have sparked a serious disturbance, and caused a tragedy.

In 2001 it was reported that tensions were running high in Luton, a town with a 30,000 Muslim community accounting for 20% of the towns population. And on 2 November, Asian shops and homes were warned by the police to be prepared for possible attacks over the weekend by members of the MIGs, described as being “a gang of white football hooligans who terrorised Luton Asians 10 years ago”. A local Luton newspaper reported that the MIGs met in the Nags Head Inn in Dunstable on the previous Monday evening, 29 October, to draw up a “battle plan”. The landlady of the pub denied any such meeting had taken place.

Twenty four Luton fans were arrested in September 2002 after violence at a Worthington Cup match against Watford at Vicarage Road on 10 September. Ten minutes before the game was due to start, rival fans fought running battles on the pitch after dozens of Luton fans jumped over advertising hoardings and ran onto the pitch. One fan was seen tearing out up a corner flag and brandishing it like a weapon. The kick off was delayed 15 minutes and Riot police eventually restored order by forcing the fans back into their seats and blocking off the area behind the Vicarage Road goal. There had also been violence in Watford town centre before the match, with what was described as an “orchestrated” and “arranged” fight outside the Moon Under Water pub in Watford. The Football Association launched an investigation into the days events, and when The Football League also announced that they would be launching an investigation, the two football authorities agreed to launch a joint investigation. Both clubs said they would ban for life any of their fans found to be involved.

Nearly a year later in August 2003, at the start of the 2003–04 season, it was revealed that most MIG members had not attended any Luton Town matches since the match with Watford the previous season, with most of the 24 still awaiting trial. Bedfordshire Police had received money to help stamp out hooliganism, with £200,000 earmarked for an investigation into the fighting at the Watford match in the 2002–03 season and some going toward preventing opposing fans from causing trouble that season with Luton apparently being seen as an easy target, and Luton followers seen as an “easy touch” by other hooligan firms. In December 2003, ten Luton fans and four Watford fans were jailed at Luton Crown Court for between seven and fifteen months for their part in the fighting on the pitch at Vicarage Road the previous season. And a day later six Luton fans were jailed for between eight and fourteen months their part in the fight at the Moon Under Water pub.