In March 2002, the Gremlins fought with hooligans from Sunderland’s Seaburn Casuals in a pre-arranged clash near the North Shields Ferry terminal, in what was described as “some of the worst football related fighting ever witnessed in the United Kingdom”. The leaders of the Gremlins and Casuals were both jailed for four years for conspiracy, with 28 others jailed for various terms, based on evidence gained after police examined the messages sent by mobile phone between the gang members on the day. 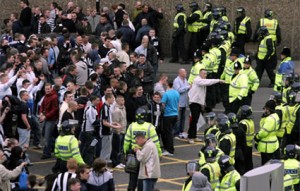 On 2 April 2003, about 95 fans were arrested when around 200 fans of Sunderland and Newcastle clashed in Sunderland Village Centre before an England UEFA Euro 2004 qualifying match against Turkey in the city. The fans then attacked the police, pelting them with missiles including bottles, cans and wheel trims. Some sources attributed these clashes to a resurgence in the conflict between the Gremlins and Sunderland Casuals.

On 9 January 2005, violence erupted after a home FA Cup match between Newcastle United and Coventry City. Shortly after 6 pm, several men entered the Three Bulls Heads pub in the city centre and attacked Coventry fans inside, with fights spilling onto the street. Police intelligence later concluded that the attack was carried out by members identifying themselves as Gremlins, who had been trying but had failed to arrange a fight with Coventry fans. Members of the gang were immediately arrested fleeing after being tracked by CCTV. After investigations and raids a total of seven men were charged as a group with affray and pleaded guilty. As all of the victims had fled and could not be traced, no more serious charges were laid. 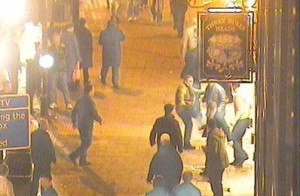 Before the firm were known by there current name, the gremlins, Newcastle United’s firm were known as the Newcastle Mainline Express or NME due to their use of the rail network when travelling to away games. At the height of football hooliganism in England during the 1980s, the NME were an extremely active firm causing mayhem wherever they went. They famously threw a petrol bomb at West Ham fans housed in a corner of St. James’ Park leading to many fans commonly referring to that area of the ground as “fire-bomb corner”.