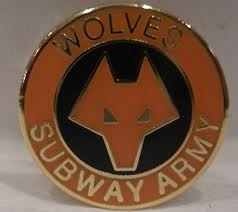 The Subway Army are a Hooligan firm attached to Wolverhampton Wanderers F.C. (Wolves) and were at their peak during the 1970s and 1980s. The firm became famous during the 1970s by ambushing rival fans in subways leading to Wolves home ground, Molineux, a tactic which earned them their Subway Army tag.

The original lads who became members of the Subway Army met at a concert by The Jam at Stafford Bingley Hall in the late 1970s. A fight broke out during the show & lads from rival areas of Wolverhampton including Wednesfield, Bushbury & The Scotlands joined forces in a fight between local Mods from Stafford & surrounding areas. The lads became friends & the Subway Army was born. The firm was multi-racial with both Black & White members no part inspired by the local Ska/Two-Tone movement featuring bands like The Specials, The Selector, The Beat & of course London band Madness. In 1979 two of the Subways members also attended a few of Liverpool FC’s home games & were inspired to dress in the same designer clothing as Liverpool’s hooligans, this look then soon caught on among the other members & regular shop-lifting expeditions around the Midlands meant that all the members were soon wearing top sports & designer clothing. By the start of the 1980/81 season Wolves Subway Army were earning a massive reputation among fellow Hooligan firms despite many of their members still being in their mid- to late-teens (their younger brothers & their friends – many still at school – were known as ‘The Subway Apprentices’). Not only that vicious fights with ‘older’ local pub gangs in the Wolverhampton area led to local MP’s calling for Police to do something about the fierce reputation they now had. Like most hooligan groups in those early days The Subway was not a very big firm with only around 30-40 ‘genuine’ members plus around another 15-25 ‘lads’ who attended Wolves matches as well as the younger Apprentice members which was around 15-20. 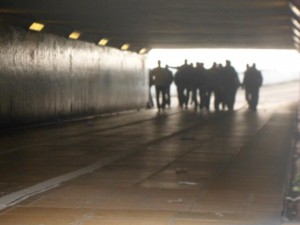 In 1982 after a triumphant away game at Leeds United in which the Subway had won a fight against their rival hooligans from Leeds, members of the Subway were making their way home after arriving back in Wolverhampton at around 9pm. On walking past The George public house (now called The Varsity) they were confronted by a large gang of local woolie backs & beer monsters (slang hooligan terms for none trendy youths & men) who had previously been involved in several violent fights with the Subway most notably at Dunstall Racecourse. Never ones to back down & despite being heavily out numbered the Subway ran at their rivals & a fight ensued. Within seconds the Woolies retreated back into the George pub & locked the doors. It was then that one of the Subway members realized he’d been stabbed. In the panic that ensued trying to get away from the arriving Police, valuable time was wasted getting him to a hospital & unfortunately he died. A Murder investigation was launched by West Midlands Police & within hours the whole gang were arrested & put on remand. The lad that died was only 18 years old. This signalled the end for the Subway Army. Most of its members were either sent to borstal or jailed for their part in the fight. The woolie back who stabbed the Subway member received only 3 years jail for manslaughter. The name ‘The Subway Army’ has never been used since – contrary to what you may of read or heard.

The Subway Army have always been one of the most highly rated firm of football hooligans from the early 80s & are mentioned regular in the many books that have been written about this time by other football hooligan members from other clubs.

Not long after this Wolves FC began dropping down the divisions finally landing in (then) Division 4. A Small firm of hooligans made up of younger brothers & friends of former Subway Army members began to get together at games during the 1985/86 season. Although no name was ever attached to this group for some reason the name ‘The Bridge Boys’ stuck to them although to this day it has never been acknowledged by any of its said members. 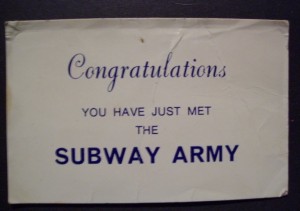 On 15 August 1987, the opening day of the Fourth Division season, Wolves visited Scarborough for the North Yorkshire club’s very first game as a Football League side. The match, which ended in a 2-2 draw, was marred by the violent behaviour of some Wolves fans. One spectator even fell through a roof at the Scarborough stadium in the chaos.[2]Two days later, the Football Associationtold the club that all of its away matches that season would be all-ticket. In June 1988, 18 men were jailed after being convicted of taking part in the violence. This incident prompted West Midlands Police to mount an under-cover operation in which they would infiltrate the Wolves hooligans. This became known as Operation GROWTH – Get Rid Of Wolverhamptons Troublesome Hooligans.

This lasted around 6 months & ended with dawn raids on all the club’s major hooligan members. In all the police made around 100 arrests. It was the first ever Police operation using the new Holmes 2 Computer (Home Office Large Major Enquiry System). This meant that while all other similar football related trials were collapsing because of the way evidence was gathered, Operation GROWTH was ‘watertight’. Helped by some of the hooligans informing on their so-called mates, the Police secured around 60 convictions resulting in 20 members receiving prison sentences of between six months & two years. Everyone convicted also received a 5 year ban from all football matches (The film ID starring Reece Dinsdale was loosely based on Operation Growth). This resulted in a quiet period on the hooligan front at Molineux with many now going to England away games to escape the ban. Towards the end of the 1990s new younger hooligan factions began to appear at Wolves games.

In August 2000, Wolves were listed as one of the most violent football clubs in England and Wales.

On 31 October 2001, some Wolves fans were in the Feathers pub, near Molineux, in Wolverhampton before a home game against Millwall, when a group of up to 250 Millwall Bushwackers burst through the police lines at Wolverhampton railway station. They attacked the Feathers pub, and two Wolves fans were slashed in the face with stanley knives. The groups were split up before the rest of the Wolves hooligans could get there.

On 5 April 2002, in the return fixture, Wolves Hooligans arrived in Paddington with the intention of getting revenge. However, they were spotted by two police officers, and their coach was escorted to The Den. A policing operation of over 300 police officers prevented the Millwall and Wolves groups from clashing. Police were pelted with bricks, bottles and fireworks by Millwall fans attempting to get to the Wolves fans.

On 21 April 2002, Wolves were playing away at Sheffield Wednesday – a game which ended in a 2-2 draw and resulted in Wolves missing out on the second automatic promotion place in Division one. Promotion instead went to their local rivals West Bromwich Albion. Before the game, members of the Sheffield United hooligan firm, the Blades Business Crew attempted to ambush Wolves fans at the railway station. 14 people were arrested. During the game about 500 Wolves fans who had got into a section of home seating at Hillsborough were moved into an empty corner of the stadium. After the match the trouble continued with the three rival groups of fans roaming Sheffield city centre looking for trouble. Two police officers and a steward were injured during clashes.

Albion fans found themselves on the receiving end of further violence from Wolves hooligans on 20 February 2011, when a smoke bomb was thrown into an area of The Hawthorns occupied by Albion fans after a late West Brom equalizer. Albion fans retaliated and coins were thrown between the two sets of fans. 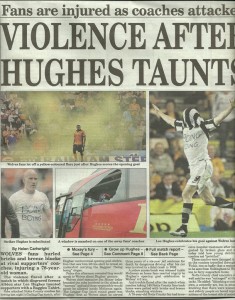