The 6.57 Crew is a football hooligan firm linked to the English Portsmouth F.C. The name, 6.57 Crew is taken from the time that the Portsmouth to London Waterloo train left Portsmouth and Southsea station.  The firm were one of the most active firms in the 1980s and caused chaos wherever they went. On 22 September 2001, the 6.57 Crew fought with Coventry City fans both at the match and in Coventry city centre. Before the match hooligans from both clubs clashed in the city centre.

During the match, some Portsmouth hooligans ripped up seats and threw missiles at Coventry fans. After fighting broke out in the stand, riot police were called in and restored order. Following the match, further violence broke out in Coventry again. Ninety-three people were arrested for their involvement in riots involving over 300 people before and after a match with South coast rivalsSouthampton F.C. on 21 March 2004. The police were attacked, shops were looted, and cars were vandalised. Of those arrested, 64 were given banning orders, and some were jailed. One of the arrests included a ten-year-old boy who became the youngest-ever convicted football hooligan in the United Kingdom, when he was found guilty of violent disorder. In August that year, 54 Portsmouth hooligans were banned for life by club chairman Milan Mandarić for their involvement in the riots at the Southampton game. 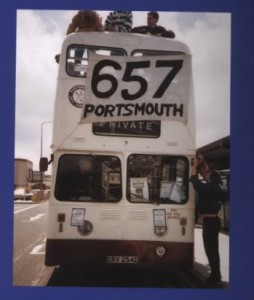 The 6.57 Crew were featured in an episode of the Bravo documentary series Britain’s Toughest Towns, which focused on Portsmouth hooligans. They have also been the subject of three books, Rolling with the 6.57 Crew, Playing Up with Pompey: The Story of the Portsmouth 6.57 Crew and 6.57 The Story of Pompey’s Hooligan Crew. Banned From Travel In May 2006, 130 Portsmouth hooligans had to give up their passports so they could not travel to the 2006 World Cup in Germany because of their convictions for football-related crime.