We will kick things off with a classic picture of British Rail football excursion tickets from Leeds away games in the ’80s, 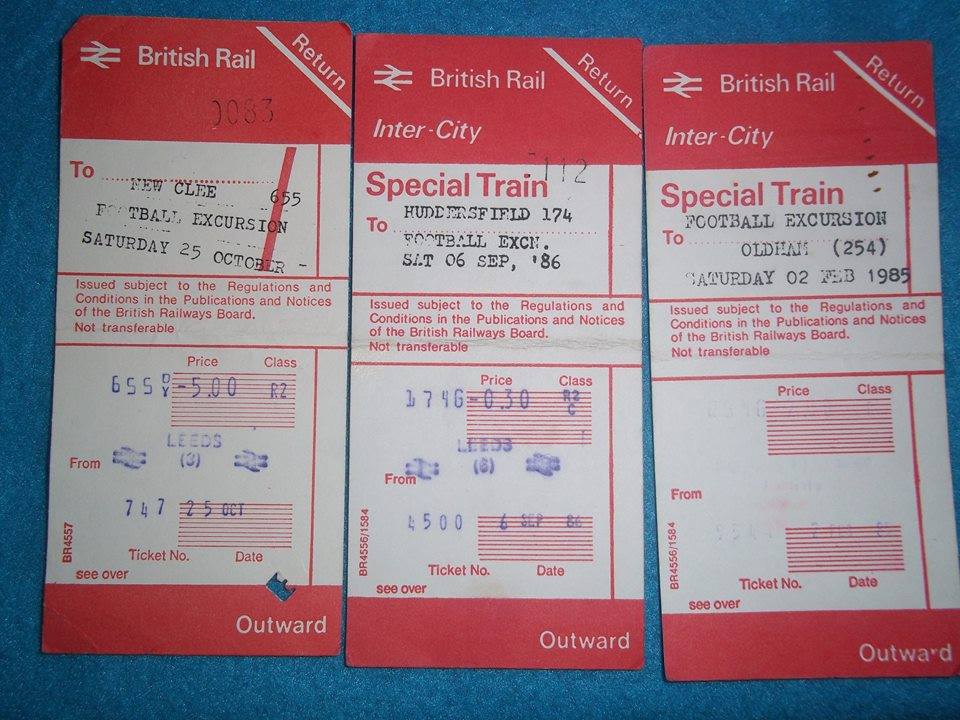 During the peak of football hooliganism in the 1970s and 1980s, Football Specials were chartered to ferry fans to away games. Spare carriages and redundant stock were used for many. One football hooligan firm, the Inter City Firm that follows West Ham United, was named after the InterCity trains they travelled on. The firm following Leeds United, the Leeds Service Crew, named themselves after the regular services they traveled on due to them being less heavily policed than football specials.

At a transport security conference in London on 14 February 2007, the deputy head of British Transport Police, Deputy Chief Constable, Andy Trotter, called for re-introduction of the Football Specials, warning that fans were disrupting trains. Trotter said his resources were “being stretched by the pressure of herding growing numbers of fans around the country on match days. Even when services to match day hotspots such as London, Manchester and Liverpool pass off without arrests, non-football going passengers can be frightened or irritated by fans’ behaviour”. Adding that, “There is an argument for the football specials, the trains that take fans backwards and forwards, but that’s a matter for the train operators.” He said he would like to see fans taken off trains, “I would much prefer if there is something done not to have them coming on the system at all.”

British Transport Police welcome their return, a spokesperson saying “it gives us the chance to isolate the fans from other passengers”.

Virgin Trains, whose West Coast service covers 16 clubs, said reviving charted trains was hampered by a lack of spare carriages, unlike in British Rail days when there was spare and redundant stock. Great North Eastern Railway (GNER), which carries fans between London, Leeds and North East England, uses Middlesbrough F.C. stewards to help prevent trouble. GNER said that train timetables were specified by government and did not allow charters.

The Football Supporters’ Federation, said bringing back football specials was the right idea for the wrong reason. “If there was enough demand for a football special and it could be run at a certain time I think a lot of people would be happy with that. But we don’t accept that a lot of football fans who go on trains are hooligans.”