This article is taken from an american website, interesting to see how the portray the hooligan culture.

They’re as British as Page 3 girls or fish and chips – but they’re far from tasty, except when it comes to a brutal scrap. In fact, gangs of vicious soccer thugs leave a decidedly bad taste in the mouth. And if, while wearing the wrong colors, you chanced upon a troop of these yobbos after an English football match, you might soon be savoring the taste of blood and a gob full of smashed teeth. Football hooliganism may not be the problem it once was, but the names of some of its firms are enough to strike fear into the hearts of opposing supporters and bystanders alike. Here’s our list of seven of the most notorious. 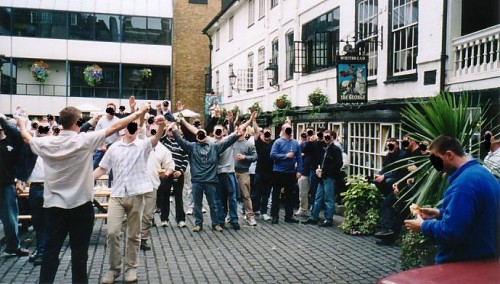 The hooligan firm of infamous English football club Millwall, the Bushwackers take their (misspelled) name from the American Civil War ambushers, and no one would want to be attacked by these nasty Brits. They even had an improvised weapon named in their honor – the Millwall Brick, made of a newspaper and used to bash up rival fans. At the height of their activity in the 1980s, the Bushwackers stirred up serious ultra-violence during matches, and were responsible for some of the worst rioting and missile-throwing in British football. Not that they wouldn’t be proud of this. Although the firm is not the force it once was, in 2001 they slashed two of Wolverhampton’s firm in the face with stanley knives, while 2002 saw more bloodshed on the night of a Birmingham City play-off described by veteran police officers as the worst violence they had ever experienced. An unmatched rep for disorder.