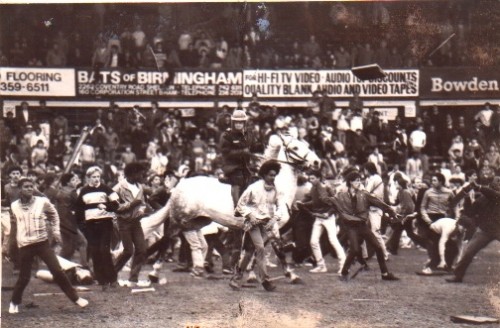 Back in the late ’70s, the chant of “Zulu, Zulu!” on the streets of Birmingham could only have meant one thing: the Zulu Warriors, Birmingham City F.C.’s finest, spoiling for a fight. Known for having members of various ethnic backgrounds, this mob was one of the most feared of the ’80s – and they remain the cause of major ructions. Violent clashes with supporters of rival club Aston Villa are common on derby day, and the Zulus are known for fiercely defending their territory from invading firms. Amongst the many incidents the Zulus have triggered was a series of riots in Cardiff in 2001 which saw a pub smashed up, one person assaulted and nine more taken to hospital. Then in 2006, some 200 Birmingham fans tore down fencing separating them from Stoke fans after an FA Cup match, after which fighting broke out, and police were attacked in what a senior officer described as “extreme violence”.