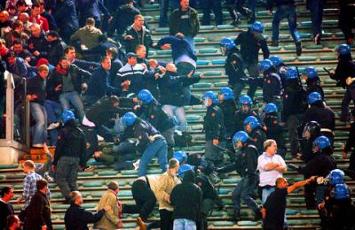 Just as Manchester United is one of the biggest football clubs in the beautiful game, so their fanatical firm, the Red Army, is said to have had the largest numbers at the height of Britain’s hooligan problem. While the name the Red Army is also used to refer to Man U’s fans in general, in the mid-’70s the name became synonymous with some of the defining incidents in British hooliganism, notoriously in 1974-75 when United had been relegated from the top flight of English football for one season and hordes of thugs wreaked havoc at stadiums up and down the country, sometimes outnumbering the home support. Their activities led to the introduction of crowd segregation and fencing at football grounds in England. Mass tear ups with other firms are well documented, with the 1985 documentary ‘Hooligan’ showing the Red Army clashing with West Ham’s Inter City Firm around Manchester. Mob rules.