Arsenal has two separate Football hooligan firms, one named as ‘The Gooners’, this being a mutation of the club’s nickname, The Gunners and ‘The Herd’.

The Gooners were known as a violent football hooligan firm, who were mainly active within the 1980s. However nowadays the name is mainly used by the majority of Arsenal supporters (the non-hooligan sector) who consider themselves to be die hard Arsenal supporters.

The Herd, the other Arsenal firm, was mainly active between the late 1970s and early 1990s, although the Herd still exist today, they now prefer to stay undercover. The Herd back in the earlier days were known as a violent football hooligan firm that had the have the distinctive war-cry “E-I-E”. 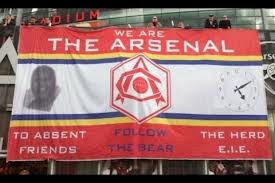 The Herd had a few main rivals back in the day of football hooliganism and still in the present day, these are the Tottenham Hotspur’s ‘Yid Army’, West Ham’s ‘ICF‘, Chelsea’s ‘Headhunters’ and Millwall’s F-Troop (now known as the ‘Millwall Bushwackers‘). Although a large section of The Herd was considered to be a violent fighting firm, a small amount of the members were not physically violent. For example Dainton Connell (aka Denton ‘The Bear’ Connell) was considered to be a folk hero by large sections of the Arsenal fans, however he unfortunately died in a car crash back in 2007, it was approximated that around 3000 mourners showed up to the funeral.

The Herd’s two most famous clashes were with Millwall fans at Highbury in 1988, in which 41 Millwall hooligans were arrested after fighting in the stands, and with Galatasaray fans in City Hall Square, Copenhagen in 2000.  The fight with Galatasary ended up with Four fans being stabbed, 11 becoming injured, one with a serious head wound and 54 fans being arrested.

The Two Stories Behind the Meaning of E-I-E

It was apparently said by a Gooner when another teams “firm” was coming towards them. The Gooner, as the story goes, had a mouthful of pie or something at the time and he was trying to say “here they are” but it came out sounding like “E.I.E” instead.

The term E-I-E may also mean “Every Idiot Enjoys”, none of the stories have been confirmed as of yet.