Leeds united Service Crew are a football hooligan firm which are linked to the Championship team “Leeds United”. The Service Crew were first brought to the forefront within 1974 and were named after the public service which brought the fans to the away games, instead of the heavily policed special football trains which were organised for such instances. The service crew have a reputation within the hooligan groups for being one of the most violent firms in English football history. However the firm are not as active nowadays and tend too stay much quieter.

Back in 1985 when football hooliganism was rife within England, BBC 6’O clock news ran a special report which listed some of the worst football hooligan firms that created chaos up and down the land, Leeds united were among the top five worst clubs.  Nowadays however, the club very much distances itself from the service crew and anything that they carry out. During the football hooliganism period the firm were notorious and nearly brought the club to it’s knees.

There are several events throughout history which became high profile events and they can all be found below: 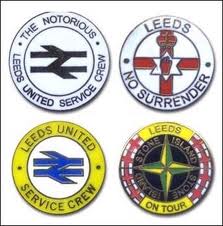 28 May 1975,  European Cup Final Vs Bayern Munich
This incident occurred at the Parc des Princes stadium in France, Striker Peter Lorimer had a goal disallowed in a game which ultimately ended in a 2-0 defeat to the West German side,this came after two penalties were rejected by French referee Michel Kitabdjian. This then caused scores of Leeds fans to begin ripping up the seats within the stadium and throw them onto the pitch and at fans within the ground, this then caused the fans to clash with the French Police as they then continued to invade the pitch. As result of this, Leeds United were banned from European competitions for four years, however this was eventually brought down to two years after an appeal. Although it would be another seventeen years before Leeds tasted European action once again.

1982-83 Season, Cleethorpes Fighting and Newcastle
In the 1982–83 season, the club has been relegated to the Second Division of English football, in the very first game of the season some of the Leeds fans went on what was described within The Sun newspaper as “an orgy of drinking, looting and fighting” within Cleethorpes, this is where 600 Leeds fans had stayed over the night before the match was due to be played. In October of that season, two Newcastle United players were hit by missiles at Elland Road and the FA ordered another inquiry into the club and the fighting that was happening on regular occasions.

January 1987, FA Cup Third Round Draw
In January 1987, the club’s reputation for hooliganism had become that when Leeds were drawn against non-league Telford United in an FA Cup third round tie, the Shropshire club outright refused to host the game at their ground, this games was then played some 30 miles away at the stadium of West Bromwich Albion.

5th May 1990- Promotion Time For Leeds
On 5 May 1990, Leeds and their fans travelled to AFC Bournemouth on the South Coast for the final game of the 1989-90 Second Division season. Victory within this game would give Leeds the Second Division title and promotion back to the top flight after eight years away from top level competitive football. Leeds finally achieved this dream with a 1-0 win. However this succes was marred by a string of vandalism on the town centres pubs and shops as well as a series of battles between the sets of hooligans and police officers within the town. On this occasion 104 people were arrested and 12 police officers were injured.

28th April 2007- Relegation Time for Leeds
On 28 April 2007, during the Championship game which took place at Elland Road against Ipswich Town, about 200 home fans managed to find their way on to the pitch and ended up forcing a 30-minute delay after a late Ipswich equaliser which all but sealed Leeds relegation to League One. Around 100 of the Leeds fans then ran toward the South East stand where the away supporters were sat watching the game. In January of 2008 thirteen Leeds United fans were handed football banning orders, totaling 45 years after they pleaded guilty to affray in connection with the pitch invasion.

The Leeds United Service Crew have several differnt hooligan rivals, these are listed below: