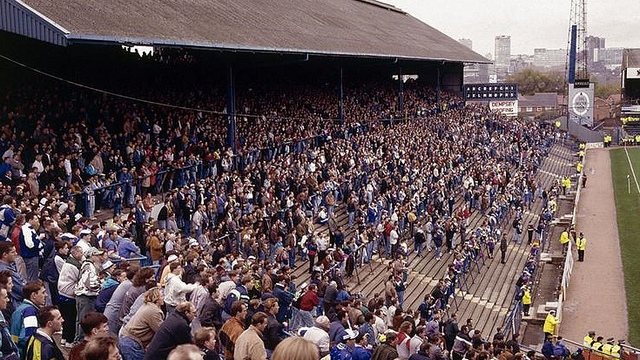 Surely the most iconic thing in British football has to be the old terraces and football grounds, these were the type of football grounds that were tucked away in a forest of chimneys, making for a delightful approach through cobbled streets on a rain swept afternoon, evoking an adrenaline surge when spotting the floodlights and sheer ecstasy on entering for the first time. Grounds with the charm of outdated conditions and pre-war facilities.

The Taylor report has introduced a dramatic change or loss of stands and traditional football grounds in Great Britain. Yet, with the demolishing of stands and grounds Great Britain is losing its footballing heritage. Nothing is saved for posterity. Great Britain and its inhabitants have an exquisite taste for traditions, history and romance in so many aspects but strangely enough not when it comes to football.

The most disappointing thing in my eyes is that the youth of today, the next generation, will not get to experience the ‘rough and ready’ feel of traveling to an old style football ground. Instead they will only know the feel of plastic, soulless all-seater stadiums that are a symbol of the corporate giants who run football today. There are still a good few stadiums left in the higher leagues that have that old school feel about them, take Turf Moor for example. Although half of the ground has been modernised in the past 20 years and has been abolished of the terraces that once rocked Burnley, it still has that nostalgic feel. Situated amongst rows of terraced houses, in the heart of Burnley, it reminds you of how football should be, how it was once for the fans, the working class people, not the Russian or Arab billionaires.

It is heartbreaking to see clubs ignoring their rich history when yet another stand is reduced to rubble. As if there is a collective shame over yesteryear. What is wrong with incorporating traditional features in new designs?

Probably the best preserved ground is Hillsborough. This is a sheer relic for the connoisseur. This teasing shrine evokes the smell of Oxo, the whiff of tobacco, the odour of genuine leather balls and the sight of terraces packed to the rafters with men in hats.