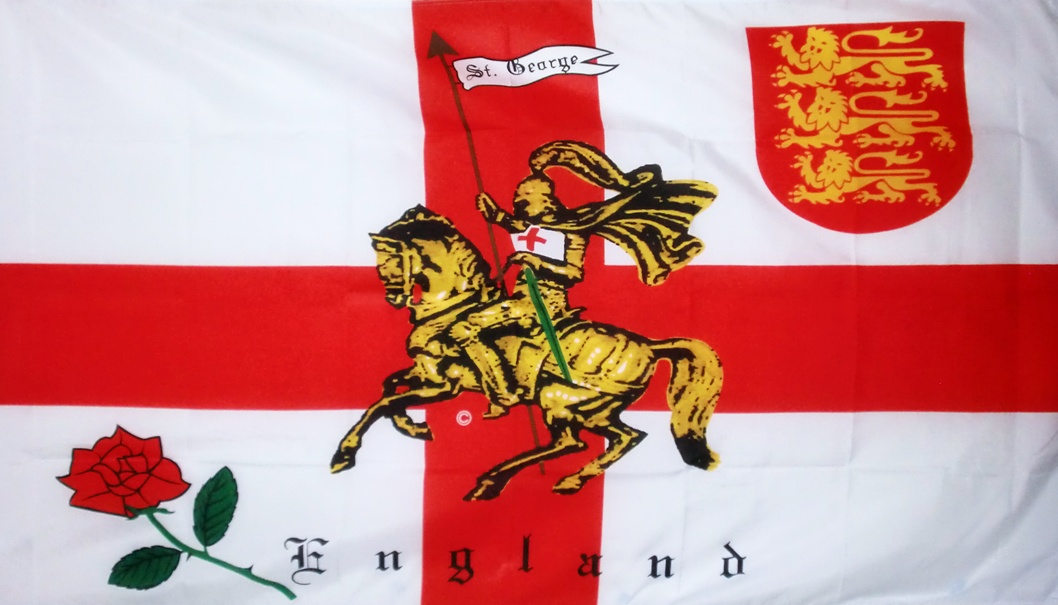 “Never , in the field of human conflict , have so many owed so much to so few .”

British by birth , English by the grace of God.

As Easter often falls close to Saint George’s Day, the church celebration of the feast may be moved from 23 April. In England, where it is the National Saint’s Day, for 2011 and 2014 the Anglican and Catholic calendars celebrate Saint George’s Day on the first Monday after Easter Week (2 May and 28 April, respectively). Similarly, the Eastern Orthodox celebration of the feast moves accordingly to the first Monday after Easter or, as it is sometimes called, to the Monday of Bright Week.

he earliest documented mention of St George in England comes from the venerable Bede (c. 673–735). He is also mentioned in ninth-century liturgy used at Durham Cathedral The will of Alfred the Great is said to refer to the saint, in a reference to the church of Fordington, Dorset. At Fordington a stone over the south door records the miraculous appearance of St George to lead crusaders into battle. Early (c 10th century) dedications of churches to St George are noted in England, for example at Fordingham, Dorset, at Thetford, Southwark and Doncaster. In 1222 The Synod of Oxford declared St. George’s Day a feast day in the kingdom of England. Edward III (1327–1377) put his Order of the Garter (founded c. 1348) under the banner of St. George. This order is still the foremost order of knighthood in England and St George’s Chapel at Windsor Castle was built by Edward IV and Henry VII in honour of the order. The badge of the Order shows Saint George on horseback slaying the dragon. Froissart observed the English invoking St. George as a battle cry on several occasions during the Hundred Years’ War (1337–1453). Certain English soldiers also displayed the pennon of St George. In his play Henry V, William Shakespeare famously invokes the Saint at Harfleur prior to the battle of Agincourt (1415): “Follow your spirit, and upon this charge Cry ‘God for Harry, England, and Saint George!'” At Agincourt many believed they saw him fighting on the English side.

[1552] wher as it hathe bene of ane olde costome that sent Gorge shulde be kepte holy day thorrow alle Englond, the byshoppe of London commandyd that it shulde not be kepte, and no more it was not.

Chronicle of the Grey Friars of London

St George’s Day was a major feast and national holiday in England on a par with Christmas from the early 15th century. The Cross of St George was flown in 1497 by John Cabot on his voyage to discover Newfoundland and later by Sir Francis Drake and Sir Walter Raleigh. In 1620 it was the flag that was flown by the Mayflower when the Pilgrim Fathers arrived in Plymouth, Massachusetts.

The tradition of celebration St George’s day had waned by the end of the 18th century after the union of England and Scotland. Nevertheless the link with St George continues today, for example Salisbury holds an annual St George’s Day pageant, the origins of which are believed to go back to the 13th century. In recent years the popularity of St George’s Day appears to be increasing gradually. BBC Radio 3 had a full programme of St George’s Day events in 2006, and Andrew Rosindell, Conservative MP for Romford, has been putting the argument forward in the House of Commons to make St George’s Day a public holiday. In early 2009, Mayor of London Boris Johnson spearheaded a campaign to encourage the celebration of St George’s Day. Today, St George’s day may be celebrated with anything English from morris dancing to a Punch and Judy show. Additional celebrations may involve the commemoration of the 23 April as Shakespeare’s birthday/death.

A traditional custom on St George’s day is to wear a red rose in one’s lapel, though this is no longer widely practised. Another custom is to fly or adorn the St George’s Cross flag in some way: pubs in particular can be seen on 23 April festooned with garlands of St George’s crosses. It is customary for the hymn “Jerusalem” to be sung in cathedrals, churches and chapels on St George’s Day, or on the Sunday closest to it. Traditional English food and drink (e.g. afternoon tea) may be consumed however it’s more likely that patriots will go out and get hammered with their mates to celebrate.

There is a growing reaction to the recent indifference to St George’s Day. Organizations such as English Heritage, and the Royal Society of Saint George (a non-political English national society founded in 1894) have been encouraging celebrations. There have also been calls to replace St George as patron saint of England, on the grounds that he was an obscure figure who had no direct connection with the country. However there is no obvious consensus as to whom to replace him with, though names suggested include Edmund the Martyr, Cuthbert of Lindisfarne, orSaint Alban, with the last having topped a BBC Radio 4 poll on the subject.

Religious observance of St George’s day changes when it is too close to Easter. According to the Church of England’s calendar, when St George’s Day falls between Palm Sunday and the Second Sunday of Easter inclusive, it is moved to the Monday after the Second Sunday of Easter. In 2011, for example, 23 April was Holy Saturday so St George’s Day was moved to Monday 2 May. The Catholic Church in England and Wales has a similar practice.