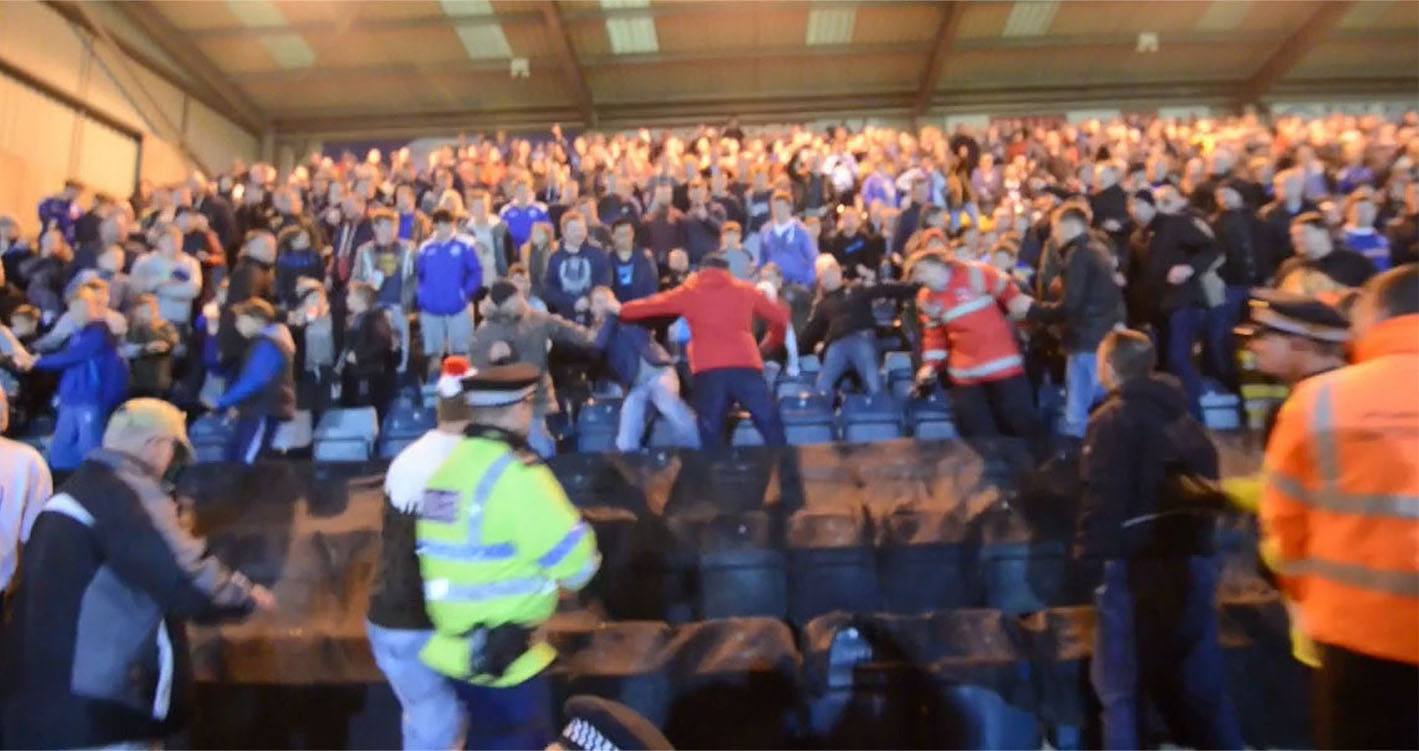 The video above, by MEN photographer Sean Hansford, contains some strong language

A total of 28 supporters were thrown out of Rochdale’s Spotland Stadium during Saturday’s League One match, which visiting Oldham won 3-0.

One man was arrested inside the ground for possessing a potentially-lethal flare. Flares and ‘smoke bombs’ were also let off during the game.

Shocking video footage of arrests being made and two fans running out from the Rochdale end of the stadium onto the pitch towards Oldham fans in the away end has emerged.

The footage shows one man being held down by FOUR Greater Manchester Police officers in the Rochdale Pearl Street end as play continues on the pitch.

He is shown thrashing his legs and body around as officers hold him down. Two supporters then dash out onto the pitch and run over to Oldham fans in the Willbutts Lane stand.

A fight also breaks out between two men in the home end before one of them is grabbed by an officer and restrained as punches are thrown.

A young child can be seen visibly distressed being comforted by a steward as the men scramble over seats to brawl. A supporter in a wheelchair is also seen being led to safety. The attendance was 7,269, with 3,200 Oldham fans making the short trip to Rochdale.

A break-down of what the nine men were arrested on suspicion of, or which club they supported, has not been revealed.

But Chief Inspector Chris Hill told the M.E.N. that CCTV footage would now be studied to determine whether any other offences were committed.

He said “As always with derby matches, no matter what league they are in, there is always excitement and tension amongst the fans. This means a specific policing plan is implemented to make sure the day is enjoyable for all involved.

“The majority of fans were well behaved and I would like to personally thank those supporters from both clubs. It is, however, unfortunate that a small number of so called fans let themselves and their club down when dispensing smoke bombs and flares inside the stadium.

“This is both anti-social and extremely dangerous to those inside the ground. Police and stewards will simply not tolerate this sort of behaviour and you will be arrested.

“We will now be viewing CCTV footage within and outside the ground to ascertain whether anymore offences were committed.”

Rochdale chief executive and club secretary Colin Garlick said Oldham fans bought tickets for the Rochdale ends of the stadium and they made up the majority of the ejections.

The match was ticket-only for visiting fans but tickets for Rochdale fans could be bought at the ground.

Mr Garlick said: “The match was sold-out for Oldham fans well before the game and fans without tickets were warned not to travel.

“There were some that got into the Pearl Street end and the Sandy Lane end despite warnings at the point of sale and at the turnstiles.

“Oldham fans made up the majority of the ejections and the arrests.”

A policing plan is expected to be reviewed and could be stepped up as the two clubs meet again in the league at the SportsDirect.com Park, Oldham, on January 3.